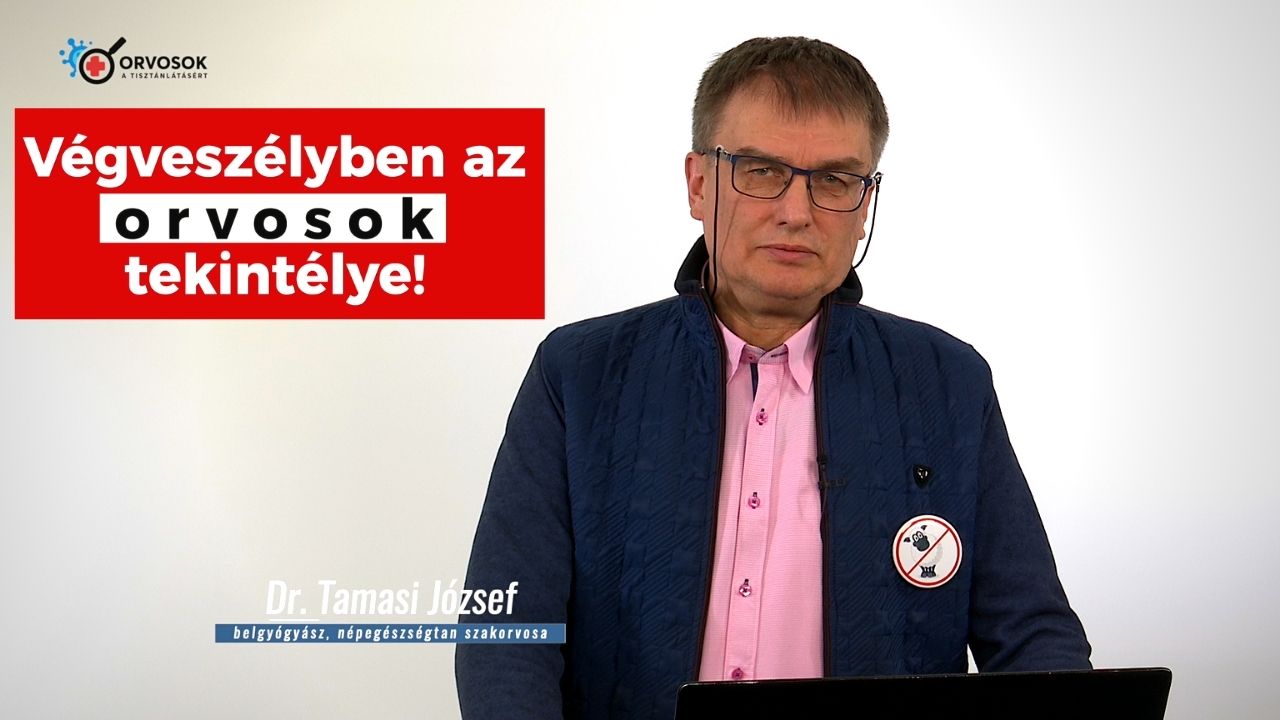 Dr. József Tamasi is an internist and specialist in social medicine. The English translation is below.

Now that the Hungarian elections (*parliamentary elections in Hungary on 03 April 2022) are due to take place, the closures, regulations have been reduced, it is time to take stock and to discuss and evaluate the role of the health sector and doctors so far and in the future. We should acknowledge the mistakes; the lies and the medical community should work to think about how to restore the very damaged reputation.

Not an epidemic, but a “Great Reset” programme that was the result of a two-year ordeal.

Behind the epidemic propaganda stays Klaus Schwab and his criminal gang who created the “Great Reset” programme, which has nothing to do with goodwill towards people, or a real epidemiological threat. The real purpose of the pharmaceutical industry profit and total control over humanity.

Two years after the outbreak of the “epidemic” we can say that it is not a medical, not a health problem, but a pseudo-problem, created by mass marketing and mass psychosis, it is about deception, and the Hungarian state violence directed by the foreign criminal power that has been superimposed on it.

We have already exposed all the lies

– The COVID death toll is a lie, in fact it is much less than in a flu epidemic, they lied about measures needed based on the numbers.

– They lied about the WHO, which they claimed knew better.  Then we saw the WHO talking nonsense, as dictated to it by its masters. The WHO is a private institution,

and it’s the opinion of the pharmaceutical industry that started the fake pandemic,

the false measures, and this, at most, according to Hungary’s international treaties

not according to independent medical science and especially not according to ancient medical ethics. The allegations made by the WHO, by its terrorist leader in Africa, are merely a means of deception. It is time to leave the WHO.

-They lied about vaccines as if they could stop an epidemic that doesn’t exist.

-They also lied about the vaccines being harmless, that they are not built into our own genome.

– They lied about being in a hurry, so they don’t do the always necessary experiments, they do not follow how many people get sick and die from vaccines and lied about the fact of professional opportunities for doctors to reconsider the possible stopping of vaccines, the end of coercive measures.

– They lied about it being an accidental pandemic, because we know they had been buying COVID 19 devices for years, they wrote the scripts in advance, and modified the criteria for declaring a pandemic, to make it as easy as possible to lie.

-They lied about the need to wear a mask, they lied about keeping their distance, about freedom of assembly, about curfew, – because none of it makes any medical sense.

– They lied about the immunity certificate, because they were not medically guarantee the immunity of the person who received it.

– They lie about being in a constant hurry, because they never once had any reason to be in a hurry, just a show to avoid time to evaluate the previous terror measures, to find out who was responsible, to learn from mistakes, to turn things good.

There is a programme of terror orchestrated by psychopaths, an algorithm, but which, but the measures suspended because of the parlamentary elections are not end of the story.

There are a number of professional errors behind these claims:

COVID-19 disease cannot be detected and diagnosed only by tests and the tests are not authentic, the different tests are not correlated, no single testing method is always able to detect the same result (the test result is not repeatable and therefore not factual), PCR tests give manipulable results depending on the amplification cycle, but even tests performed lege artis (over 25 cycles) can give false positive results many false positives, which means that the more tests are performed, the more “infected” is, So it is not a viral epidemic,  but a testing epidemic, and so the statistics from COVID 19 – which are based on the daily mantra of cases since the beginning of the pandemic, infected, deaths are false, without any basis in fact”!!!

In fact, it is part of the fraud, to talk about the “infected” by testing asymptomatic people, who do not forward the “infection”, do not get sick and die, they are portrayed such, as if the “infected” were a danger to society, and therefore put in quarantine, they are segregated, they have panic, not just for him, but his environment, his company, his family too. Severe COVID patients are not sick from COVID-19, but from their severe primary disease, from injury from their vaccines are severe condition.

The doctors were also deceived, and they were wrong, they made mistakes, when, on the basis of a fearsome epidemic restrict the normal health care of the population, when they persuaded people to get vaccinated, when it was presented as the only effective treatment for COVID disease, when there was no evidence to support this. Neither that it is effective, nor that there is no other cure, or even what disease sickness what it cures. Do will colleagues want to continue this devilish, criminal charade? Politics and the medical community itself must restore the authority of doctors, that they are free to decide the appropriate treatment for a disease on the basis of their freedom of conscience and professional competence, procedures, because if this is removed, and prescribe the only salutary cure, the only protocol, then they are permanently erased medical freedom. A doctor is not a soldier following orders, but a thinking scientist, artist, teacher, who puts the unconditional interest of his patient at his disposal with all the means at his disposal. This epidemic is not a plague epidemic. The data on the basis of which the central measures were declared, are false, did not prove the extreme danger of the epidemic, but a propaganda campaign medical thinking. You have become the mercenaries of a system that enslaves the population! Respect for the exception! You have been bought by the kilo in this pseudo-epidemic, your salaries were raised to the millions and you accepted it. You were intimidated and you lied, spread fake news, used the credibility of your white cloak, terrorized those entrusted to your care. They have lost all sense of medical and ethical judgement, not informed by the other critical side of the medical literature. You are in the service of a treacherous foreign power! The WHO is not a professional forum, it is a rant against professionalism, a private organisation forcing the pharmaceutical business of a backwater state on the states of the world, a terrorist hotspot. It is well known that ignorance does not absolve you of the crimes you have committed.

-You have refused to provide real care to patients on the grounds of a pseudo-epidemic, you have often denied patients’ strong, desperate requests.

– You have believed that COVID is a serious, contagious disease without having verified it for yourselves.

– You have easily accepted the new ridiculous quackery-level medieval system, that the dead who lied to COVID were not dissected, even though you never feared TB, typhoid, AIDS, hepatitis or cholera before.

– You have accepted bogus testing, instead of a real medical diagnosis, even though the medical literature is full of sceptical articles.

– You have forced experimental drugs on innocent people, which have already killed animals in animal experiments, and even injected them and buried their heads in the ground, instead of being informed of the sea of side effects. You still do not know how many have died and will die as a result of these vaccines and you don’t care. You are the firing squad of the backroom powers that be.

– You are launching ethics procedures, you’re adjudicating against those doctors, who question your pseudo-epidemic behaviour, which is incompatible with any ethics. You don’t even know what medical ethics is anymore, you break a thousand rules in this kind of witch-hunt. I can tell you from my own example, that the National Commission of Medical Ethics, for example, has a court document that it is acting unethically. They lost a court case against me,

where the jury ruled, that the proceedings in which I was ethically censured by the national panel, left a lot to be desired, for example, I was not informed of who was involved, so it may have been a paper exercise, or on a brother-in-law friend basis. They did not answer a single point in the second level of my submission with sufficient bibliographic references. In addition, the complainant, a very modest one, in fact without a single mention of complaint submitted only. We were not even allowed to know the criteria for the decision. Because he liked it that way. Obviously as if nothing had happened,

they shake themselves up and start the same thing all over again. This is how the modern witch hunt works.

– You didn’t have the courage either, to stand up and debate dissent in a conference, or a public deliberation.

What do I suggest to the doctors?

The 3rd COVID conference will be held on 13 August 2022 in Budapest. An excellent opportunity to demonstrate your expertise in COVID. We are eager to meet brave doctors who can challenge and not just sneak, snitch, qualify and incite.

I suggest that awakened people organise small groups among themselves. Stand up boldly and express your disagreement with the corrupt central propaganda. Behave ethically. Find out more on our site, the side of the epidemic deniers, because we’re not saying anything out of the blue, but that the lies must end and the ethics and control of medicine must be restored. The problem is not when they disagree with us, but when they are unable to engage in debate, discussion and truth-telling. This is called spinelessness in public discourse. No philosophy can justify it, that one cannot stand up against false teachings that cripple people in a debate, to read about the epidemic in the tabloids, to accept fake tests as a diagnosis, to reject those who need help. And we all received the same training,

everyone can recognize, what you can really call an epidemic, who’s infecting you, what a licensed vaccine is, when a vaccine is effective, what a mask is good for outdoors, in all infection-free weather. Every doctor should be able to judge the validity of statistical data and read from real data.

They must find a solution! So many doctors cannot fail, people need doctors, the white coat, the authority. I do not know where to reverse this immense degradation, but it must be done.

It must be started and joined. The first ones take the glory. Go for it! Let’s find those who are now waking up and acting like doctors again! Let’s hope many survive their own vaccinations, or that many have been given a placebo that doesn’t ruin their circulation, cause turbo cancer or drive them into uncontrollable autoimmune inflammation.